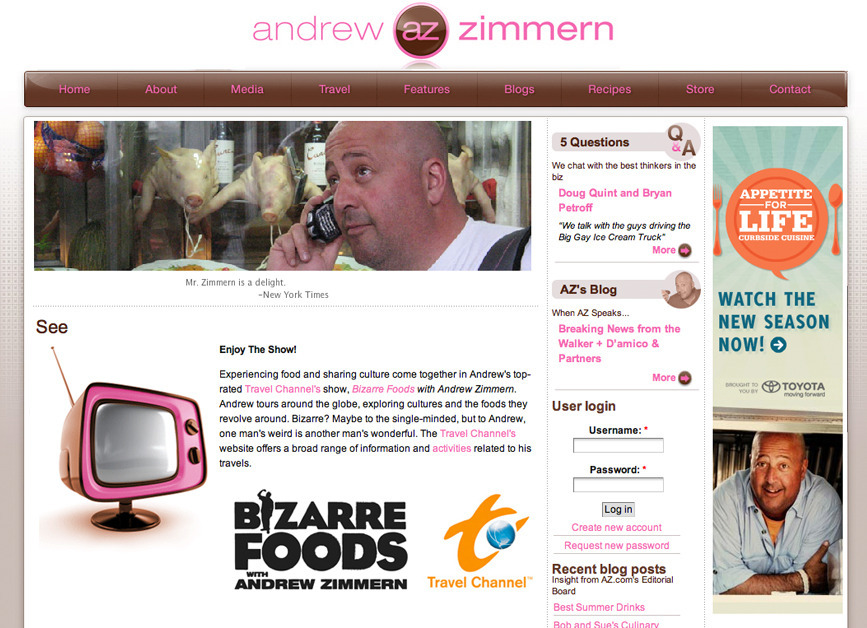 Andrew Zimmern is a James Beard Award-winning TV personality,food writer, chef, teacher and is regarded as one of the most versatile and knowledgeable personalities in the food world.

As the co-creator, host and contributing producer of Travel Channel’s hit series, Bizarre Foods with Andrew Zimmern and Andrew Zimmern’s Bizarre World, he travels the world, exploring the food in its own terroir, wherever it’s found. From restaurants to jungle markets, it’s all about discovering the authentic experience.

In May 2010, Zimmern won the James Beard Award for Outstanding TV Food Personality. His online series, Toyota Venza’s Appetite for Life, won an Effie in 2010. Bizarre Foods also took home two CableFax awards in 2009, one for Best Television Program: Food, another for Best Online Extras for Bizarre Foods in the Kitchen.

Bizarre Foods received high praise from The New York Times, The Washington Post, Outside Magazine and other national publications. He has appeared on Live with Regis and Kelly, NBC’s Today show, the Food Network’s Best Of and Tonight Show with Jay Leno.

Andrew has served as SuperTarget’s meal adventure guide, sharing his passion for ethnic foods with supermarket customers around the country. He is the international spokesman for Travel Leaders (formerly Carlson Wagonlit Travel) and Elite Destination Homes. He’s also the star of Toyota’s online web series, “Appetite for Life.”

Andrew’s first book, The Bizarre Truth, was released from Broadway Books on September 8, 2009.

What we did for Andrew Zimmern:

Like what you see? Get in touch with NADA web design, SEO & social media, Web Design from Bridgeport

Be sure to let 'em know Sortfolio sent you.